Halloween: The Ghost at the Top of the Town

The Ghost at the Top of the Town
by Olga Hughes

Recently we have been discussing what we call the ‘Top of the Town’ building, a building that has a surprisingly long history concealed beneath the layers of bright paint. It is striking and inconspicuous at the same time, for despite looking like a brightly coloured modern building, its original owner purchased the land at the very first land auctions in town in 1888. The first wooden structure, the Temperance Hotel, was built in 1892. We know this building was perhaps completely destroyed in the terrible fires of 1898, but we are not sure who built the next structure; was it the original owner William Nuttall, or Duncan N. Robertson who moved in around 1908? After Mr. Robertson left, William Fisher tore the wooden building down and built the existing brick building, interestingly comprised of second-hand bricks that came from the engine house and its chimney from the defunct Austral coal mine. There was a dentist, Dr. Fairlie, who occupied the upper floor on a Friday in the 1940s. We have reports from locals of a variety of businesses operating from there after the mid-20th century; in the late 1960s there was a fish and chip shop, and Dale Fisher remembers attending a wedding reception on the upper floor in 1969. Debbie Webster recalls leaving the primary school grounds to get fish and chips when the Hendrys ran it in the 1970s. Later there were pool tables and pinball machines on the ground floor and it was a popular local venue. There was two Chinese restaurants in the building, one which is our existing Rainbow Palace. Serafinos Pizza was also in the building, then Debbies Curtains and Craft, and up until recently Patten’s on Bridge was there, closing in 2017. The last business there was the Fish Kitchen. 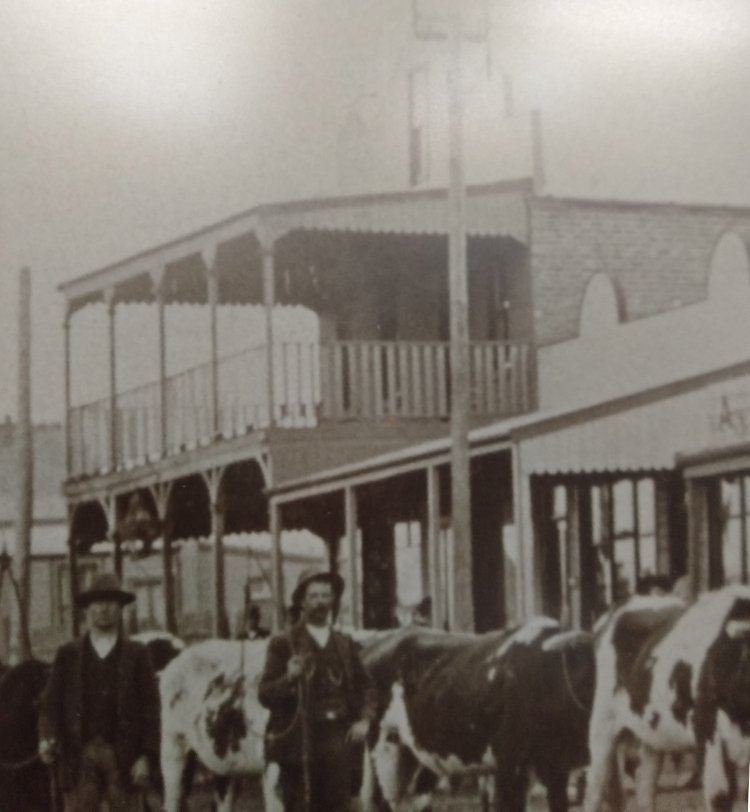 The Temperance Hotel building in the background, taken in 1913, when Duncan Roberston would have occupied the building. The bullock team is transporting a house.

As you can see we have rather a long list of occupants of the building, but no real candidates for haunting. What we do have, however, is a very recent report of hauntings in the building, from a couple, and their cat, who occupied the top floor from late 2018 to early this year. Most nights they would hear footsteps on the left side of the building upstairs. This side of the building was empty, so they would go and investigate, but find no one there. There was one window in particular that they would lock, only to find the window both unlocked and open the next day. They would lock and close the window again, and would again find it unlocked and open the next day. These incidents happened when the Fish Kitchen was operating downstairs. After it closed the frequency of the incidents increased. In the ten months they occupied the now-empty building doors would increasingly slam shut. After the occupants would make sure the doors were closed, they would then hear them creak open again and bang with force. Upon inspection, sure enough, all the doors had opened again. Sometimes they would tell the inhabitants it was enough now and to stop, and they would, until the next day. While the occupants grew used to it, their cat was still unhappy, and would often grow frightened of something invisible to their eyes, hissing and backing away from something in the corner of the landing at the top of the stairs. Lights would turn off in the left side of the building without explanation. And in the last two months the inhabitant seems to have revealed themselves to one of the occupants, who saw a figure in the downstairs part of the building twice, and a voice saying hello. Suffice to say that was an alarming experience for them, but the occupants grew used to it, and the incidents continued until they moved out early this year.

There is many a night we go past the former Top of the Town and don’t have any supernatural encounters, so while it might be tempting to go ghost spotting, I’ll remind you the building is currently unoccupied, and ghosts will never reveal themselves when you want them to. But do share your other ghost stories with is for Halloween month!

Chizanettis ran the fish and chip shop in the 60s my family in the 70 s the pool room was run separately by the owner of the building mr Mete and his son Tony .Art shoes and receptions were held upstairs in the years prior to my family running the shop .As for a ghost haunting the building ,someone is pulling your leg .

Thanks for the information Renee. Community history is all about disparate experiences.