Every resident of Korumburra knows of our ‘Haunted House’, the stark grey concrete building that looms on the corner of Princes Street. Its boarded-up windows and lichen-covered roof-tiles seem to harbour many supernatural mysteries, but the truth is rather a lot simpler. It may not contain lost souls, but perhaps the bleak exterior conceals some lost dreams.

Mark and Emma Young first appear in the Korumburra records in 1903, a young couple in their middle 30s and residents of Silkstone. Emma’s occupation was given as Home Duties and Mark’s as a Labourer. Mark may have been a mine timber cutter, and a later school register entry of their children lists him as a carpenter; perhaps he was a surface worker in coal mining, the then-dominating industry of the district. Emma and Mark had two children prior to 1903, Mary and James Francis, and the third and youngest, Emma Eileen, was born in 1905. Emma Eileen would go on to become the proprietor of one of Korumburra’s most distinctive buildings, sometimes called a ‘Haunted House’, at 2 Princes Street. 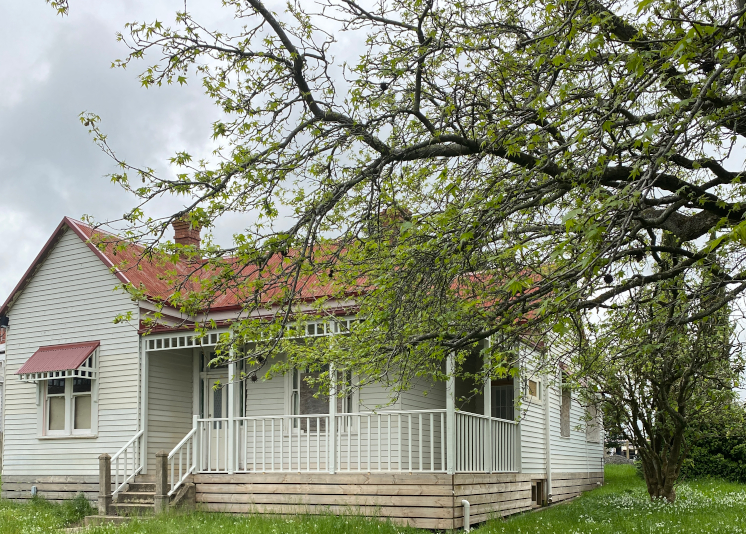 The family moved to ‘Princess St’ Korumburra about 1918. For a long time there was confusion about the names ‘Princess’ and ‘Princes’ Streets in general local usage, although all plans show the full length of the street as ‘Princes St’, as it is now known and signed. The family lived at the weatherboard house now known as 4 Princes Street, adjacent to the concrete block house on the Shellcot Road corner, and still standing today. 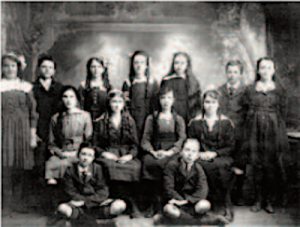 Emma Eileen commenced her schooling at the Korumburra Primary School, transferring to St. Joseph’s Catholic School after it opened in 1914. A photograph of the Grade 8 Merit class of 1919 shows Emma as a pleasant-faced young lady with long curls. It is unknown whether she returned to State School No. 3077 when higher elementary classes began there in 1920, but Emma was listed as a Clerk in the electoral records from 1927 until 1968. By 1972 Emma had retired, her occupation listed as Home Duties.
Emma had a physical disability that affected her leg, but it didn’t seem to have a major impact on her active life. Our historical society president Robert Newton recalls that he used to deliver briquettes to her, and one day was called into the house with his delivery to find Emma perched almost two meters high on a step ladder, painting flowers on the ceiling of her home.

Donna Matthews told us that her father had boarded with the Youngs at no. 4 for some time, and she recalls that the family used to have bread and dripping, or “bread and tasty” when her father came home from school. Emma’s father, Mark, died in 1944 at the age of 75. Emma continued to live at 2 Princes St with her mother and sister Mary, who worked as a Tailoress. Emma Snr. passed away in 1956 aged 87. 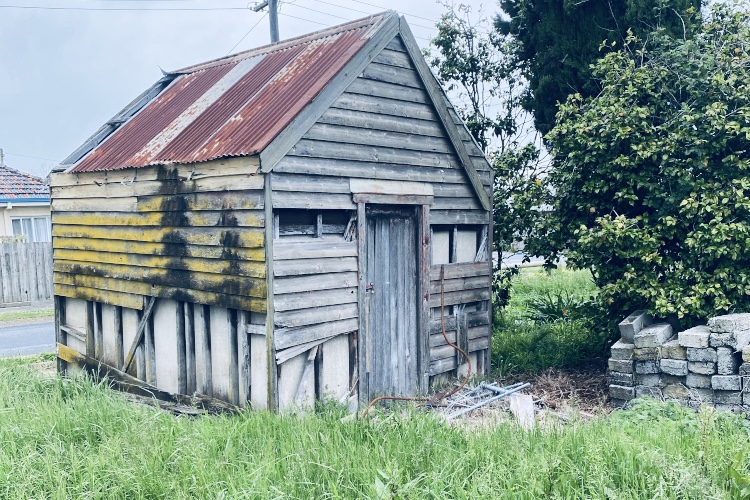 Dennis Conn remembers the original corner store, having lived halfway down the hill from Emma in the 1950s. Emma ran the single room timber building that was the neighbourhood ‘handy shop’. Steven Touzel, who grew up across the road from the Young’s home, remembers her cottage garden, filled with roses and crabapples, and her house cow.
Emma’s parents had given her a block, now no. 8 Princes Street, which became a paddock for the cow. Dennis recalls Emma’s house cow, a Jersey, like his own mother’s, and told us that Emma would tie her cow to the railway line on a long rope. The railway line ran up the back of Princess St, running west, crossed Shellcot Road and then turned south to Jumbunna. When the train would shunt up the Jumbunna line and the driver found Emma’s cow feeding along the line and tethered to the rail, he would stop the train, the fireman would get down and untie the rope from the rail. The train would pull past the cow and the fireman would then retie the rope on the rail. They would do the same on the return from Jumbunna or however far up the line they shunted. 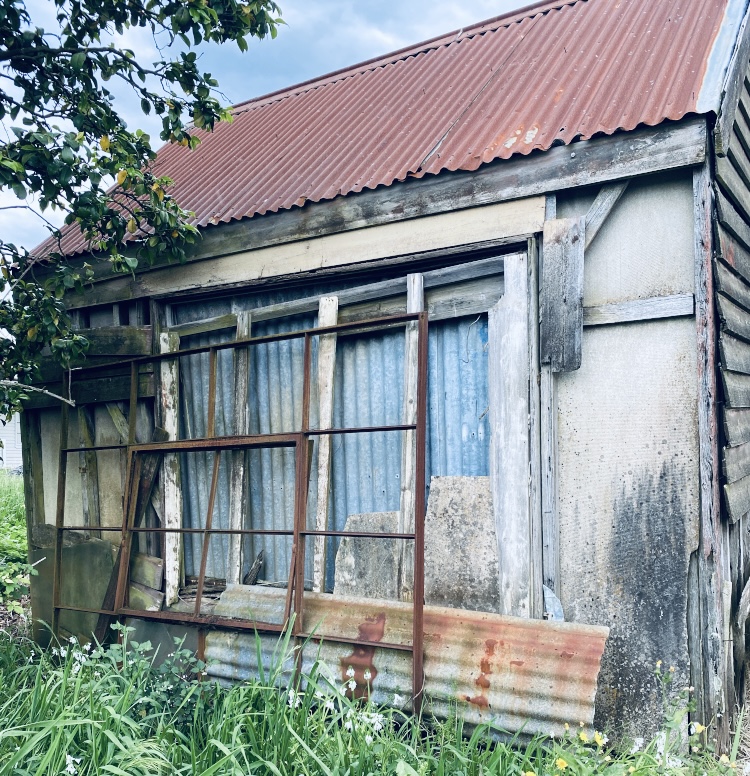 The old wooden building that still stands at the back of the property is the original timber building that housed Emma’s store. Dennis recalls that the shop stood near a large Norfolk pine, its one window faced out towards Bridge Street, and the door facing an iron gate that was on the corner of Shellcot and Princes St. One of the pines on the property is no longer standing, having fallen in a storm in 1959 or 1960, in what Dennis calls ‘one of the worst wind storms we had experienced in living memory’, causing much damage and toppling another tall Norfolk Pine in Queen Street at the Radovick Street end. The store stocked sweets, biscuits and other groceries. Dennis says when the tooth fairy arrived at his home he was fortunate enough to have been given three pence to spend in the shop on lollies. A half penny would buy one lolly cigar and a penny would buy three. 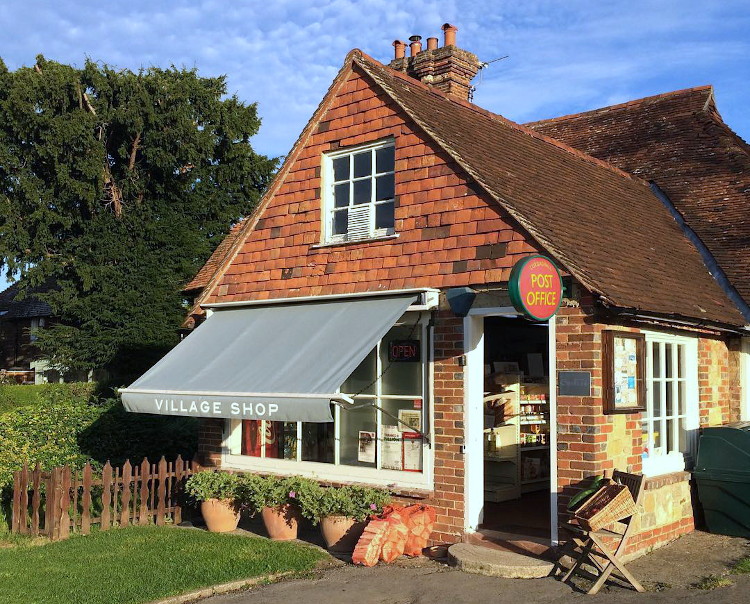 Lurgashall Village Shop & Post Office, Emma had a painting of a similar building on her store wall that inspired the new building.

Donna remembers that her friend Cheryl (later Misale), whose family lived in McQueen Ave, used to purchase milk from there. Doug Boston remembers Emma selling flavoured ice blocks from her Jersey cow’s milk, that he calls a ‘favourite of the local kids’. Doug says that the idea for the new building came from a painting hanging on the wall of the shop, of a typical English cottage style corner shop.

The wooden shop began to deteriorate and Dennis believes that the Korumburra Shire Council forced Emma to close it due to the deteriorating condition of the building and for not complying with food stuff regulations. In 1952, four years before Emma Snr’s death, there was a plan to replace the old timber shop, and after some delays, the Shire of Korumburra issued a building permit for the erection of ‘a pair of shops’ at the corner of Princes Street and Shellcot Road.

The Council had adopted the Victorian Uniform Building Regulations for the Korumburra Riding (electoral district) immediately after the Second World War, so these standard regulations and procedures were in force when the block building was erected. However, in reading notes of the council proceedings, we have a strong impression that there was something unusual or inadequate in the permit application. In November 1952 an application ‘for permission to erect a pair of shops’ was ‘held in abeyance’. This received criticism from the press ‘Miss Young, who was seeking a permit for a shop at the corner of Guys Rd. and Princes St still has no permit’. Council in January 1953 gave permission for erection of two shops with a peculiarly worded motion, ‘…under the Supervision of the Building Surveyor’. Surely this is an indication that they had some unrecorded concerns. 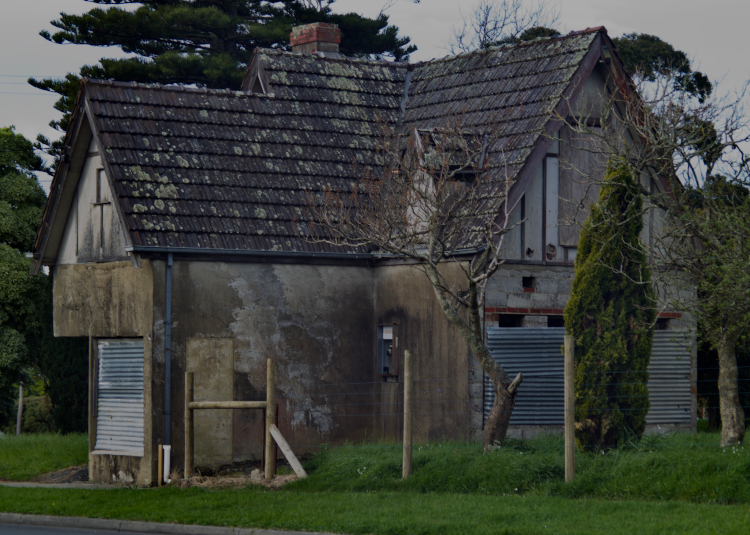 Work proceeded. The concrete blocks were cast in situ with hand-mixed concrete and the building, two shops at ground level with an upstairs dwelling, was erected as we see it now. Ernie Pounder, a bricklayer from Leongatha, was engaged to build the shop. Keith Hogan and Paddy Blake cast the footings, and it is said that they were directed by Emma to set out the work for a building that was smaller than the dimensions of the plan. Nothing fitted correctly, including the stairs, and the building was never suitable to be used for its purpose.

In 1956 the shire Health Inspector reported that the shop was incomplete, that it needed to be brought to standard, and could not be re-registered. The wording implies doubts that the intended works could or would be completed.

The Electoral Roll records Emma as being resident at 2 Princess [sic] Street, the concrete block corner building, from 1963 to 1977. There was a ladder to the top floor, where where she slept, and Emma would climb the ladder in her nightgown to go to bed. While she was living in the store Emma leased the family home, before later renovating and moving back in to no 4. Princes Street.

Dorothy Boston remembers being present when Emma told Dorothy’s mother about the catastrophic saga. Emma laid the blame firmly on the builder, but we have a limited knowledge of the whole scenario. 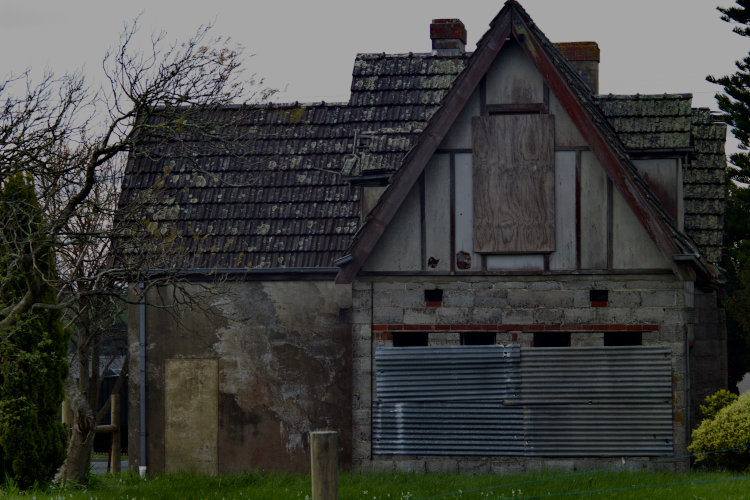 Emma Eileen Young passed away in November 1993, aged 87 years . She was respected and liked by her neighbours and by all those who knew her. The disastrous building stands stark and deserted on the prominent corner block, the subject of all sorts of rumours and stories. The building and its site is maintained by a family member, a niece and her partner, and the old house is currently undergoing some restorations.

The shop stands on its prominent site projecting a disturbing and penetrating character of an unrealised dream, a monument to a disastrous financial and personal experience of a gentle and loved lady who passed her life in the daily presence of it. Miss Emma Young deserves that such facts as we have should be known, rather than the ever expanding litany of folk legends surrounding the mysterious building.

Earlier versions of this article have appeared in the Burra Flyer and the South Gippsland Sentinel Times. 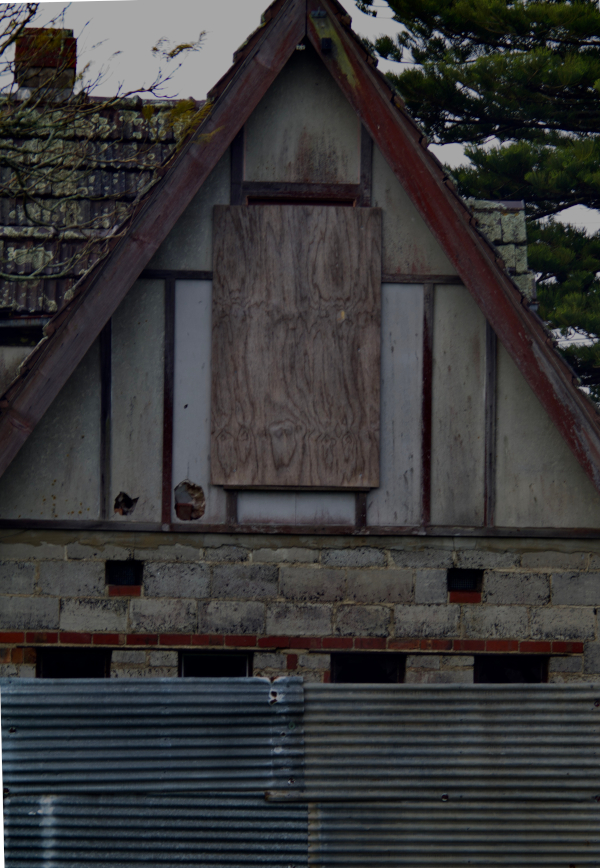 I appreciate very much the informative article re the concrete house on the corner of Shellcote road and Guys road. ( I call it ‘the folly’.) A fascinating history. Many thanks.

Great to read the story, have always wondered about the story behind this old house.

I used to walk past this house as a child in the early 60s. I’m amazed and a little chuffed that it’s still there.

I lived at 12 Shellcotts rd in the early 70s and I, like other kids, used to purloin a few crab apples from the tree which hung over the fence on the way back from school. We would see ‘old Mrs. Young’ (as we knew her) around the place with her curious gait, she would never growl at us turning a blind eye as we scooted off merrily munching on our ill-gotten gains.

I wondered about her and the boarded-up house on the corner, now I am a little wiser … and a lot older ^^